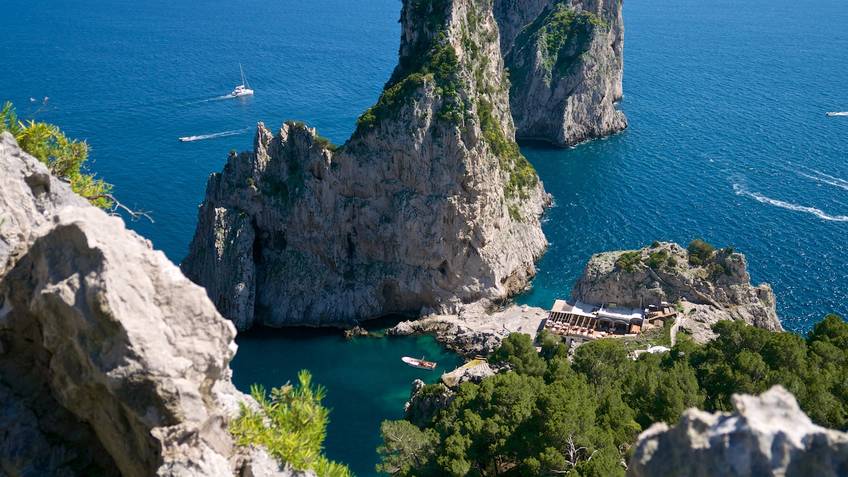 Ever since 1936, when the restaurant and beach club first opened, Da Luigi ai Faraglioni has been attracting a celebrity crowd: film stars, models, business magnates and politicians, all keen to spend a few hours bathing in the sea washing around Capri's legendary Faraglioni rocks.

Open from first thing in the morning until late in the afternoon, Da Luigi ai Faraglioni has been designed to offer customers everything they might need for a fabulous day on the beach: a large sea edge terrace, a snack bar, tiny sundecks which seem to merge into the rocks, luxurious beach cabins, supremely comfortable sun loungers, deck chairs and beach umbrellas.

Open daily from the end of April to the 1st of October.

Mediterranean Cuisine on the Water's Edge

After a morning spent swimming in the shimmering sea or lazing in the Mediterranean sun, what could be better than a leisurely lunch, savoring Capri's traditional cuisine and dishes made with the freshest of fish and seafood? Da Luigi ai Faraglioni's terrace restaurant is one of the island's finest: famous not only for its breathtaking location but also for the quality of its food and wine, served from midday until late afternoon.

Those who just want a light snack or cool drink and stop by the snack bar to order soft drinks, cocktails, and fresh fruit to be savored in the shade of your own sun umbrella.

At the end of the day, as the sun begins to fall, holidaymakers can make the most of the beach club's shuttle boat service that runs between Da Luigi ai Faraglioni and La Canzone del Mare in Marina Piccola, where the center of Capri is only a short bus or taxi ride away.

Da Luigi ai Faraglioni can also host beach weddings, parties, or private events against the backdrop of the Faraglioni!

The Faraglioni are one of the symbols of the island of Capri. To reach Da Luigi ai Faraglioni, holidaymakers should make their way to the Belvedere Tragara, from where a pretty little path through the coastal pine trees leads down to the sea, the island's legendary sea stacks, and the bathing establishment.