Capri's most beautiful panorama? Our favorite view has to be that which can be seen from the summit of Monte Solaro, which, soaring 589 meters above sea level, is the highest and most panoramic point on the island. Here the view extends across the whole of the island of Capri, the surrounding Bay of Naples, the Amalfi Coast and as far as the distant mountains of Calabria.

How to get to Monte Solaro

The easiest way to get to Monte Solaro is by chairlift. The journey to the summit of Capri's mountain takes just 12 minutes. Take the chairlift from Piazza Vittoria in Anacapri. The bus from Capri stops only few meters away from the entrance: get off when the driver calls out ''Anacapri" and climb up the steps which you'll find opposite the stop. If you decide to walk up to the summit, you can expect too take anything between an hour and an hour and a half.

Opening times and prices may vary. Please check them at info-points in Marina Grande or in Piazzetta.

The chairs on the chairlift are made for a single passenger. There is a safety bar, but it is easily lifted, so we do not recommend riding with very young or very active children on your lap.

Locals often refer to Monte Solaro as the "Acchiappanuvole" or "cloud catcher" after the thick blanket of fog which forms around the summit, especially at dawn, when the thermal difference between the sea and the rock is accentuated. The warmer, damper sea air condenses in a dense mist on the ground, the temperature of which has notably diminished during the night. Where its path is obstructed, the vapors rise upwards generating a characteristic crown of clouds. This phenomenon also occurs in the evening, especially in the autumn. The wind clears away parts of cloud, randomly revealing various segments of the beautiful island landscape below.

The area of Cetrella is situated a short distance away from the peak of Monte Solaro, at an altitude of approximately 476 meters. It is thought that the name derives from the lemon scented herb, "erba cetra" which grows here, or from Venere Citerea, indeed, legend has it that this was once the site of a pagan temple dedicated to the goddess. In the sixteenth century the hermitage of Santa Maria a Cetrella was built, right on the cliff edge towering above Marina Piccola.

The hermitage of Cetrella is comprised of a small church, bell tower and sacristy with a low dome, which was added in the seventeenth century. Residence of friars belonging to the Franciscan and Dominican orders, who elected it as their spiritual retreat, the building conserves a number of cells, a large and well equipped kitchen, wash rooms and vegetable garden. In the Church of Santa Maria a Cetrella there is a chapel opposite which one accesses the rest of the complex. The back of the church opens out on to a terrace, part of which is protected by a wisteria covered pergola, furnished with benches and a long rustic wood table.

An image of St. Maria is conserved within the church. The icon was of particular importance to the sailors of Anacapri who, in the past, when the collection of coral took them especially far a field, used to climb up to the church of Cetrella in pilgrimage prior to departure. Those fortunate enough to visit the site in spring will be guided to the spot by the intense scent of the freesias grown in the garden next to the sacristy of the church which flower in at this time of year, filling the air with their pungent perfume.

When can I visit the Church of Cetrella?

The Church of Santa Maria a Cetrella is not always open to the public. So it's always a good idea to check whether it will be open with Capri's Tourist Information Office before you set off(+39 081 8370686).

On the cliffs to the northeast of Anacapri, perched on one of the smaller masses of Monte Solaro, some 412 meters above sea level, there are the ruins of the Barbarossa Castle, the name of which derives from the appellation "red beard" given to Khair-ad-din, the much feared Ottoman admiral. The time of its construction is still matter of debate, but is considered to be sometime between the tenth and twelfth century. The castle is generally closed to the public, although guided tours are occasionally organized. Check with the Tourist Information Office (pop into the office in the Piazzetta or call +39 081 8370686) if tours are being arranged in the period when you plan to visit.

Monte Solaro and Cetrella are excellent observation point for the Capri flora and fauna. 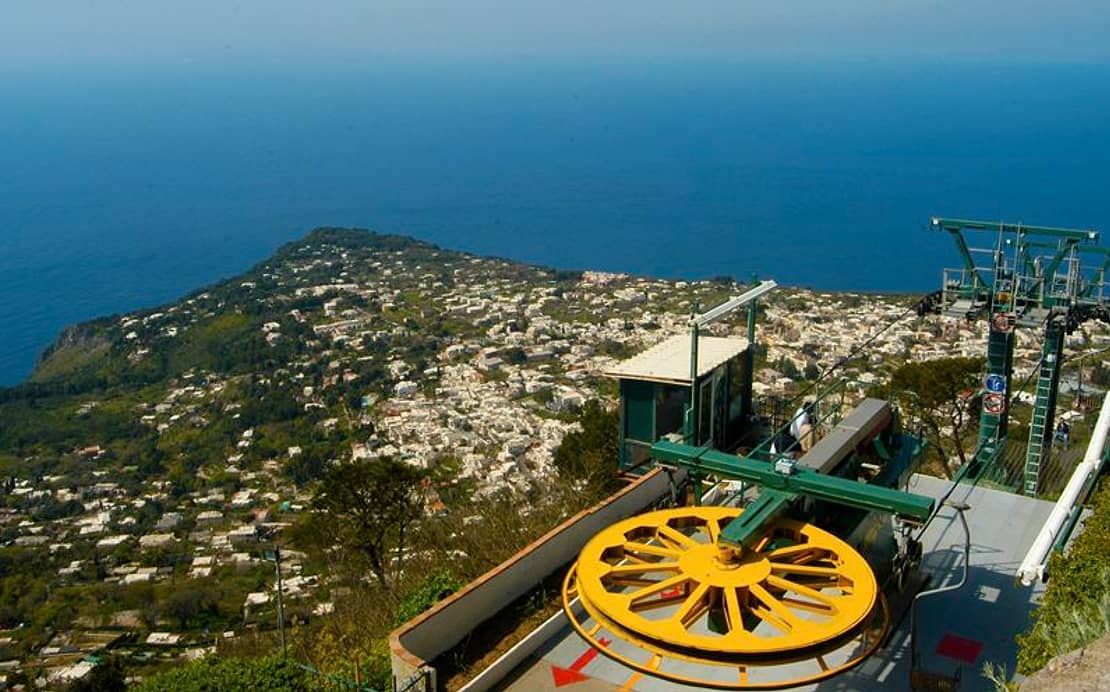 Notes: The chairs on the chairlift are made for a single passenger. There is a safety bar, but it is easily lifted, so we do not recommend riding with very young or very active children on your lap. Opening times and prices may change. Please check them at info-points in Marina Grande or in Piazzetta.

The bay where, they say, Ulysses was seduced by the sirens.

The other side of the island of Capri

The marvelous museum in Axel Munthe's dream home in Anacapri.

The lane leading to the spectacular Tuono viewing point.